Will be announced when all have been confirmed.

SONG UNITES THE NATION! WE ARE IN THE NEWS

SENATE PASSES RESOLUTION S.550 for a Year of Thanksgiving for the National Anthem September 17th 2014 – Dr. Shelli Manuel and Gray Maxwell (of Senator Ben Cardin’s office) pushed the final resolution into the hotline on Thursday and today it was passed! (We thank Senator Wicker’s office for their hard work too, and also the draft assistance of Brian Roquemore to improve Shelli’s original draft on WE THE PEOPLE PETITION site May 1 2014.) Thanks to everybody for all the hard work!

CELEBRATE A YEAR of THANKSGIVING for the BICENTENNIAL of the NATIONAL ANTHEM by supporting our resolution to the 114th Congress. (Click document icons to read more….)         NEWS FLASH! This Resolution is NOW moving through the senate hotline of the Senate Sponsorship of (R)Senator Roger Wicker of MS & (D)Senator Ben Cardin of MD – The Star Spangled Banner State!  We are hoping for unanimous vote before the end of Congressional Session in July. Please join the vote at the petition web site below!.  READ the CURRENT RESOLUTION and the  ANCIENT ONES of 1958! 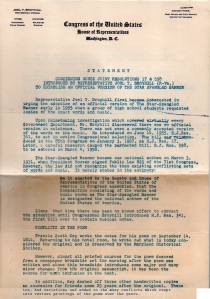 (If you would like to host a History Bee or Singing Contest or have Shelli sing/speak,  or one of our team to speak, contact our event organizer: shelli@singitamerica.com )

THANKSGIVING PARADE IN PLYMOUTH MA. Watch it at www.pactv.org

SING A LONG at STATE HOUSESSeptember 14, 2014
Join voices across America at their State Houses for 200 year Celebration.

A YEAR of THANKSGIVING for the BICENTENNIAL of the NATIONAL ANTHEM!…

HISTORY BEE, SINGING CONTESTSeptember 10, 2014
Upload yourself singing the anthem. We will pick one young and one old voice from 50 states. 200 Winners sing in DC & Baltimore. Runner up: on State House steps. Compete in a History Bee about the War of 1812-14 & Star Spangled Banner. Compete in handwriting contest. Can you copy Francis Scott Key's beautiful cursive handwriting and copy his original Star Spangled Banner document?

AP MEDIA Welcome, to cover State House events on Sept 14, 2014. SIgn up at bottom of page on contact form. Email us for Media badge and packet.